Why My Family Loved the Creation Museum 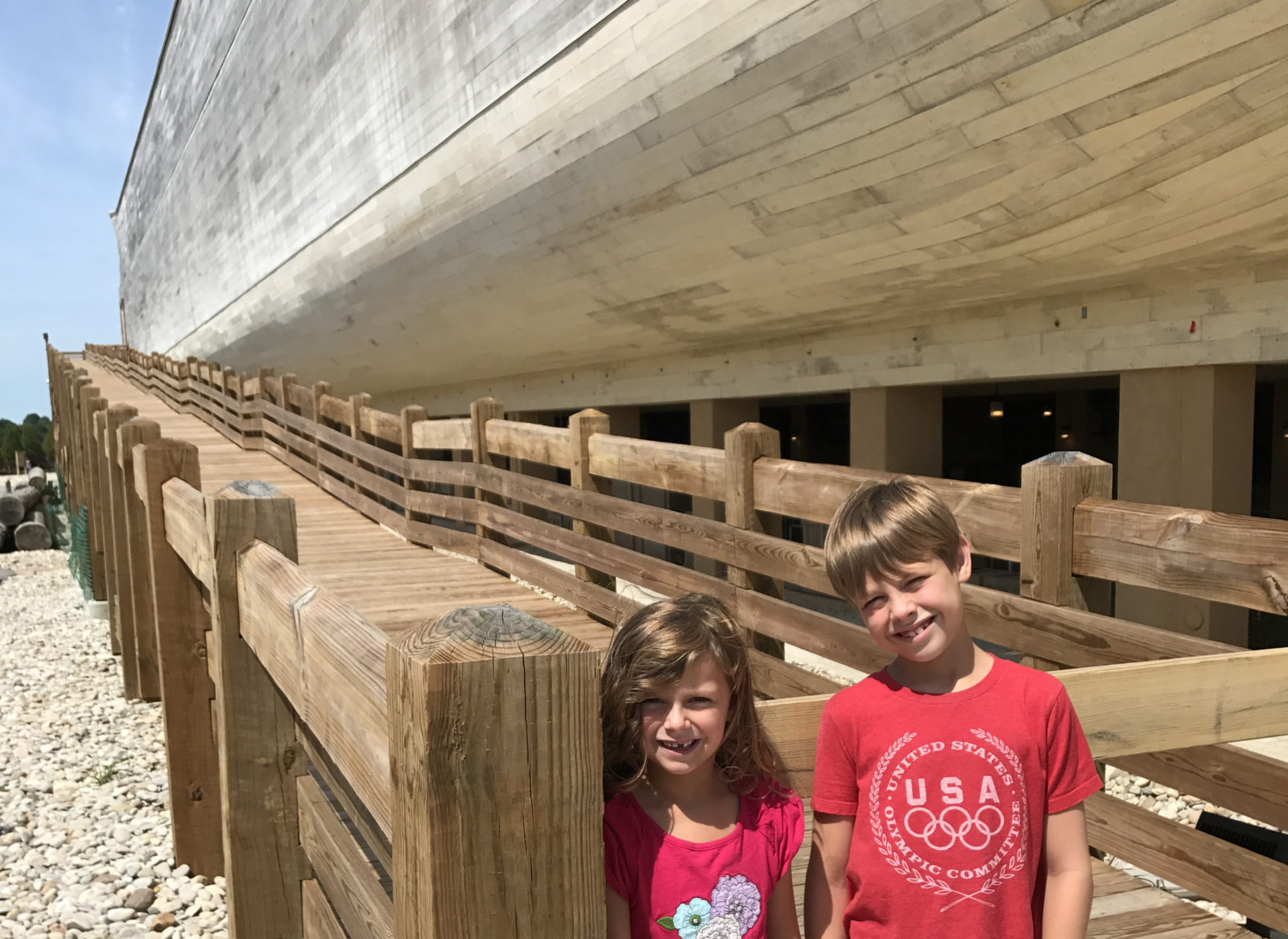 Science has become a god in our society. People depend on science to pursue everlasting life, save the planet from doom, and explain our reason for existence. Sadly, even many Christians trust and know more about science than they do the Bible. And when there is a difference in the teachings of Scripture and the theories of science, those Christians may change their interpretation of the Bible instead of confronting the atheist roots of science that interpret life through a lens that assumes there is no God.

But not Ken Ham, the president and CEO of Answers in Genesis, an apologetics ministry dedicated to helping Christians defend their faith and proclaim the gospel of Jesus Christ through a biblical interpretation of science. Through its award-winning magazine and website, Answers in Genesis (AIG) proves how scientific facts and observations line up with the accounts of creation and the flood explained in the book of Genesis.

I’ve been a fan of Ken Ham and his ministry for years. AIG’s website and magazine are bulging with in-depth articles that explain scientific discoveries from both a biblical perspective and the opposing mainstream view, showing how there is no need to bend Scripture or change its meaning to explain ancient history. Answersingenesis.com is a tool every Christian needs in his spiritual arsenal.

However, I had never been to the ministry’s facility, the Creation Museum, and Ark Encounter, a life-size replica of Noah’s ark. This summer I finally found the courage to take my family on the nine-hour trip. I say “courage” because I wasn’t sure it would be worth it. It would require hours in the car with two very bored children, money for hotels and food, and some tricky scheduling, just to go see a little Christian museum in Kentucky.

But walking into the doors of the museum, my husband and I and the two kids were all wide-eyed with wonder.

Let me start by saying the Creation Museum was no “little” museum. The architecture was breathtaking—lofty ceilings, ornamental columns, and detailed decorations. Each room had a theme, not just in substance, but in the décor and structure of the room. There were times I felt I was in the halls of a castle or walking through the streets of Jerusalem. I saw exquisite works of art that could be in any gallery around the world and exhibits that would shame the Smithsonian. In addition to all of that, a botanical garden makes up the grounds, complete with a walking path around a pond where visitors can enjoy exotic plants from around the world.

The Ark Encounter is just as impressive. It cannot be explained in words alone. You must see with your own eyes to understand the grandeur. In short, it’s a giant wooden boat … giant. The world told Ken Ham that it couldn’t be done, but he silenced the doubters when the Ark was built using the plans that God gave Noah.

As you approach the ark, you see the ramp and door that Noah used to load the animals. The same door God shut and sealed the day His judgement flooded the world. The seal had a dual purpose—to protect the faithful inside and lock the heathens out. Inside the ark, mammoth tree trunks, hewn by the hands of Amish carpenters, uphold the structure. You can’t help but imagine Noah and his sons hard at work to engineer the 50-foot-tall floating edifice. The story comes to life as you see replicas of the cargo—animals (even dinosaurs) in cages, family living quarters, and the innovation it took to feed and water that many animals each day.

But that wasn’t the best part of our experience. Here are the five reasons why my family loved the Creation Museum and Ark Encounter and why you should take your family there, too.

1. The museum is “hands on” and fun for the whole family. There are moving dinosaurs and other animatronics, planetarium shows, exhibits like the Garden of Eden and the Hall of Dragons, a petting zoo, and ziplines … just to name a few. Our family stayed at the museum for seven hours and we could have stayed longer. The kids couldn’t wait to enter each exhibit just to see what waited for them.

2. The museum is about 10 minutes from Cincinnati with its world reknowned zoo, aquarium, and family-friendly restaurants. One of the fears I had about this trip was not knowing what to do with the kids in a small town in Kentucky after the museums close. Well, it turns out that the Creation Museum is just across the border from Cincinnati. Every evening we explored various parts of Cincinnati, like the Ohio River bridge and the aquarium. And we ate Skyline Chili, which, according to locals is the real Cincinnati experience.

3. It gives you a closer look at ancient man. Ancient people weren’t savage cavemen. They were most likely artisans and craftsman. The museums give us an idea of ancient man’s humanity, how they studied the world around them and entertained themselves. They were just like us, not pre-evolved creatures.

I was especially struck by the exhibit showing Noah’s family’s living quarters on the ark. It was full of colorful rugs, pillows, and other linens. The living space had built-in shelves and a desk for writing scrolls. One wife was shown making drawings of plant life, while her husband played the flute behind her. It was a colorful, warm scene, a place one could easily call “home.” As a friend said, “Who wouldn’t want to stay in a boat for 40 days and 40 nights if it looked like that!” Indeed. It’s a far cry from the backward, uncivilized beast that many scientists portray ancient man to be.

4. The museums equip you to talk with intelligence to atheists, school teachers, and others about what you believe. A Christian can feel outmatched in a scientific discussion with those who have been educated about evolution and creationism. Even if a Christian is very familiar with the book of Genesis and believes by faith that it is truth, that’s not a very good argument for the school principal who insists that your child must learn the theories of evolution for a healthy education.

Merely holding a personal belief that Genesis is a literal record of events won’t help you answer the questions of a college student who wants to know why he should still believe his childhood faith when the physics professor seems to have all the answers.

But I found several facts explained in the museum that equipped me in new ways to defend my faith with scientific evidence. I learned that there is a fossil record of a man’s ancient footprints that scientists say is 3.66 million years old. The problem? Evolutionists don’t believe man existed then.

I learned that “Lucy” (the name given to a fossil that supposedly shows a mid-transformed monkey into man) was coerced into being humanlike. Even though most depictions of Lucy show her standing upright like a human, those illustrations are merely artistic interpretation, not scientific. Answers in Genesis shows their own version of Lucy as the fossil record indicates—a small ape.

I could go on. My kids got so tired of me stopping to read everything that I started taking pictures of all the plaques so I could study them later.

5. The AIG museums encourage your own faith. The world continually bombards our faith with doubts. They question everything we believe, from the existence of God to the veracity of Scripture to the character of Christ. It’s so wonderful to be in a place that legitimizes the way we believe.

The Creation Museum is a safe place where you can let down your guard, ask questions, and learn. There are connections between Scripture and science that you probably didn’t see before.

We also learn that science is not the enemy of the Bible, but it is actually our friend. The best proof of the veracity of God’s Word is science itself. Study it with the right worldview, and the mysteries all come together like a giant puzzle—God’s Word and the evidence fit like hand and glove.

But the main message of the ministry of Answers in Genesis is the Gospel. From the beginning with Adam, man has needed a savior, Jesus Christ. It’s in every exhibit, film, and resource they produce. Bring your family, tell your friends, invite atheists, and sponsor a college student. Everyone can get something from Answers in Genesis.