A Marriage License is Not a Receipt, it’s a Commitment 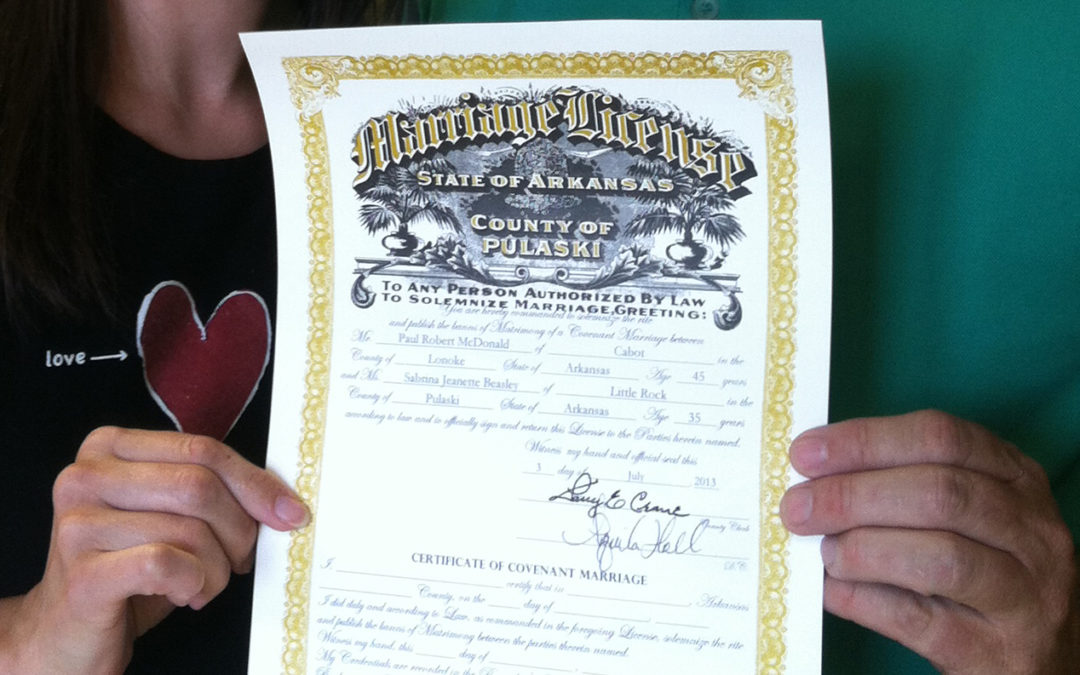 I once heard of a young man who said, “A marriage license is like a receipt. If I don’t like this wife, I can exchange her for another one.” His careless response seems shockingly harsh, but this blatant statement encapsulates the actions of our current society.

It’s the “soul mate” syndrome. Boy meets girl, boy quarrels with girl. Boy and girl fall “out of love.” Boy and girl agree they were never soul mates. So they go back to the soul-mate store and look for a better fit.

Sadly, many people discover after multiple tries that people are full of faults, no matter how perfect they may seem at first. They have strange habits, quirky character traits, bad jokes, and sensitive feelings. Many women, in particular, often think their husbands-to-be will change after marriage, but statistics show those annoying traits don’t change. Statistics also show a woman’s chances of marrying a man with no bad habits is zero percent (and vice versa for men).

So the single person is left with two choices: Marry an imperfect person and get ready for compromise and lots of grace, or don’t get married.

God takes the marriage commitment seriously. After everything God created in the Garden of Eden, He said it was “good.” But for Adam He said, “It is not good that the man should be alone” (Genesis 2:18). Jesus emphasizes this point in Matthew 19:4-6 when the Pharisees questioned Him about whether or not it is lawful to divorce for any reason:

“Have you not read that he who created them from the beginning made them male and female, and said, ‘Therefore a man shall leave his father and his mother and hold fast to his wife, and the two shall become one flesh’? So they are no longer two but one flesh. What therefore God has joined together, let not man separate.”

God only gave Adam one choice for a wife—Eve, the one God created for him. And when Adam died at the age of 930, he had only ever had one wife. God meant marriage to last a lifetime.

In addition, God promises serious consequences when that commitment is frivolously broken. Hebrews 13:4 says, “Let marriage be held in honor among all, and let the marriage bed be undefiled, for God will judge the sexually immoral and adulterous.” The prophet Malachi gives us a little more detail:

You cover the Lord’s altar with tears, with weeping and groaning because he no longer regards the offering or accepts it with favor from your hand. But you say, “Why does he not?” Because the Lord was witness between you and the wife of your youth, to whom you have been faithless, though she is your companion and your wife by covenant … “For the man who does not love his wife but divorces her, says the Lord, the God of Israel, covers his garment with violence …”  (Malachi 2:13-14, 16a).

Marriage is greater than companionship

But why is marriage so important to God that we should honor it? Paul teaches us in Ephesians that marriage is key because it is a symbol of the relationship between Christ and His people, the church.

Now as the church submits to Christ, so also wives should submit in everything to their husbands. Husbands, love your wives, as Christ loved the church and gave himself up for her … In the same way husbands should love their wives as their own bodies. He who loves his wife loves himself. For no one ever hated his own flesh, but nourishes and cherishes it, just as Christ does the church, because we are members of his body. “Therefore a man shall leave his father and mother and hold fast to his wife, and the two shall become one flesh.” This mystery is profound, and I am saying that it refers to Christ and the church (Ephesians 5:24-32, emphasis mine).

Marriage wasn’t created just to ease our loneliness. As a matter of fact, a hurtful marriage can often deepen our feelings of loneliness. Marriage for the Christian is a much greater calling—to represent God’s love for His people. So, when the marriage commitment is not taken seriously, unbelievers witness quarreling and unforgiveness and connect it with Christianity, resulting in a misunderstanding of God’s love and possibly further rejecting Him.

When marriage is lived out the way God intended it, our witness grows stronger, and God is glorified through it. That doesn’t mean godly marriages are perfect, but it does mean that both husband and wife take their commitment seriously, not seeking divorce as the answer.

When I was single, I thought marriage would be like having a roommate. I lived with six different girls before getting married. “How different could it be?” I thought. After we got married, I realized what “one flesh” meant.

In marriage, every decision the wife makes affects her husband and vice versa. Decisions are no longer made for yourself but for the whole family, including the children. Your life is no longer your own, and sometimes what we want for ourselves isn’t the best for the family. Sacrifices have to be made. Ephesians teaches both husband and wife are held responsible to give of themselves.

To the wife, Paul says:

It isn’t easy to defer to your husband when you don’t agree with him. Marry someone you can trust with your life. Picture the guy you’re dating right now—can you trust him so much that you could submit to him in everything? It’s kind of scary, isn’t it?

This matter of sacrifice also applies to the husband. To him, Paul says:

Husbands, love your wives, as Christ loved the church and gave himself up for her…” (Ephesians 5:25, emphasis mine).

Paul is explaining that Christ loved the church so much He sacrificed Himself by dying on a cross, giving up His innocent life so the church could benefit. This is how great the love should be from a husband to his wife. Think about the girl you are dating right now—do you love her enough to take suffering for her?

Couples are now moving in together as a sign of commitment before marriage. The conscientious single is aware of the enduring and serious obligation of marriage and wants to “try it on” before devoting his or her life to such an honorable institution.

Unfortunately, living together only creates more problems. The biggest issue is, according to Barna research, more than 80 percent of people who move in together are looking for their soul mate. As mentioned earlier, the search for a soul mate is a dead end. What you will find is that the person you are dating is messy, quirky, and just plain annoying sometimes. Sadly, most people take that as a sign this person isn’t their soul mate, when in fact, they are just living with a normal person.

Another big problem is the lack of boundaries. Marriage is a defined commitment, and there are legally-binding consequences for breaking that commitment. Living together, however, is just a verbal agreement with little or no strictly defined rules. This leaves room for all sorts of misunderstandings, some worse than others, such as, how do you define “cheating” if there is no real commitment?

Along with those main issues, there are all sorts of other heartbreaking and confusing problems. For example, what happens when one wants to get married and the other wants to wait? This can go on for years in some cases. What happens when one wants to leave, but you both are tied up in financial commitments? Who should pay the credit card bill? Who should pay the rent? And who will hold that person accountable when the bills don’t get paid? Living together brings far more consequences than it’s worth.

Marriage is a commitment

A marriage license is not a receipt, and a potential spouse is not a pair of shoes that can be tried on and taken back. Marriage is the miracle that takes place as a result of two lives becoming one. It takes time and sacrifice, and there are no shortcuts. But when both man and woman commit to doing the hard work and prayer a good marriage requires, the results are God-honoring and fulfilling.