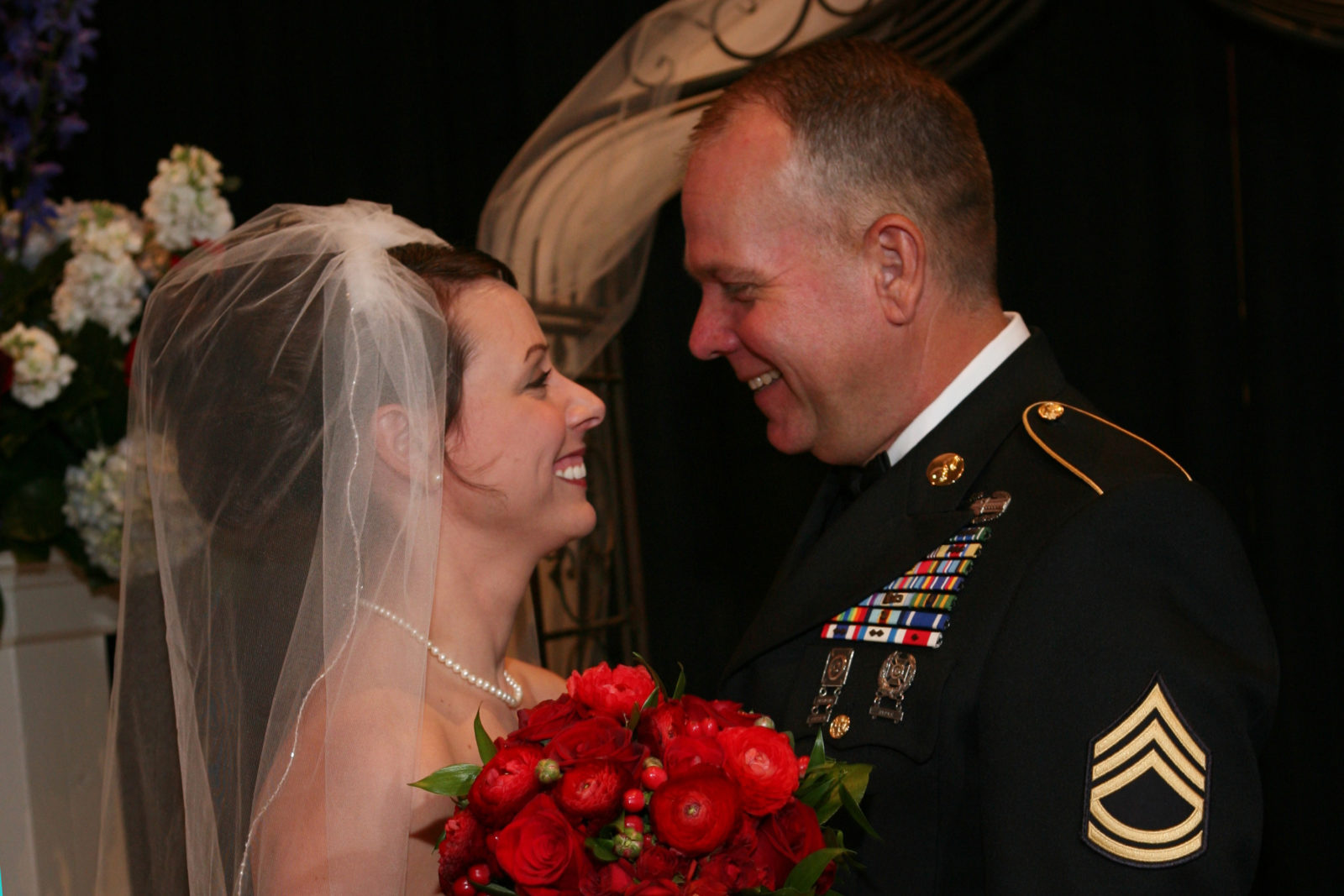 When my husband, David, died in a terrible car accident in 2010, I grew close to my mother-in-law, Joy, who shared my grief, not only for her son, but for her own husband, who had died 30 years prior.  Our stories mirrored each other—both widowed in our 30s, having lost our husbands in car accidents, each of us with a two-and-a-half-year-old boy and a baby girl.  Now she had lost her only son.  We clung to each other like only widows can, seeking to find meaning in these tragedies.

Having never remarried, Joy supported my hope to find a new husband, often seeking the occasional beau for me.  She knew David always wanted a father.  He would sometimes imagine the joys of having a father, and he worried about his mother being alone.  It was so heartbreaking to him that on more than one occasion he made me promise to remarry if anything ever happened to him.  “Don’t do what I did, Sabrina,” Joy said with compassion and regret.  “Get married again.”

The relationship between us harkened back to the story of Ruth and Naomi in the Bible—two widows in search of a new life.  And with the desire of remarriage strong on both our hearts, we began to seek the Boaz of our story.  Boaz was Naomi’s relative who married Ruth and saved the women from a life of poverty and gave Ruth a chance to produce an heir in the line of Christ.

Boaz is often referred to as the “kinsman redeemer” which means a relative who rescues.  The same term is used to define Christ, who is our brother but also our groom.  And when I entered the world of widowhood, Boaz became to me a picture of what I was looking for—my kinsman, a brother in Christ, who could lead our family in the footsteps of Jesus and leave my children with a godly legacy.

I was two-and-a-half years into my widowhood when I met Robbie McDonald, also a widower whose wife died of cancer.  I was convinced when we met that the match wouldn’t work.  He was 10 years older and in a different life stage.  His 23-year-old was soon to be married, and the adolescent years were still ahead for his 13-year-old.  The thought of blending these two young men with my two preschoolers sounded unimaginable.  “There is a good chance that in the next five years you are going to be a grandfather,” I told Robbie.  “I’m not ready for that!”

For six weeks, Robbie pursued me, and I continued to tell him no … most of the time.  He lured me with tickets to musical theaters, ballroom dancing, and military balls.  He would send me text messages every day asking me something new about myself. “I want to know all about you,” he said. He sent flowers and wrote cards.  While my logic kept saying “no,” my heart kept saying, “Why not?”

We could talk for hours, and he understood my widowed journey.  We shed tears about the loves we had lost and praised the grace of God that sustained us.  We had fun together, and best of all, he loved the Lord.  Discussions of theology frequented our conversations.  He served the church as a deacon and Sunday school teacher, and he served his community, having won the Chamber of Commerce Member of the Year Award.

But the details of our lives together nagged at me.  He once said, “I’ve prayed about you and me, and I have a peace about it.”  I replied, “Well, you better start praying that I have a peace about it, because I don’t!”  Our only mutual friend, Scott, happened to be Robbie’s army chaplain.  Scott went to college with me, and he knew David from a couples small group we were in.   Knowing both Robbie and me fairly well, Scott encouraged Robbie that if he really felt that this was the will of God, then he should keep pursuing until God said stop.

Honestly, I was scared of the work it would take to blend these two families.  I knew it would require sacrifice on my part, and I wasn’t sure I wanted that.  If only I was naïve like the first time I got married, but I knew how many feelings were involved, and how complicated the family dynamics would be.  Being single was lonely and my children had no father figure in their home, but it was easier and simpler with me being the only one in control.

Then one Sunday I heard guest speaker Pastor Dan Jarrell from ChangePoint Church in Alaska, and he changed my perspective.  He said, People go to see IMAX movies about Alaska to see its beautiful mountains and lakes and enjoy the wildlife. They view it all from the comfort of a cushioned seat and the thermostat set at 72 degrees.  They might even have a bag of popcorn and a drink.  They walk away from the theater saying, “What a beautiful place.”

But, he said, you can’t really experience Alaska that way.  What you can’t see from the screen is the way the Aurora Borealis looks with colors dancing 360 degrees around you.  You can’t tell that the snow is unique from anywhere else in the world—it crunches like Corn Flakes under your feet.

But, Jarrell continued, if you come to Alaska to experience the majesty, you must also endure the freezing cold temperatures, 24 hours of darkness, and winters that seem to never end.  You have to take the good with the bad.

Pastor Jarrell reminded me that life is about more than comfort.  If I want to actually live—to experience the life that Christ is calling me to live, I must be willing to feel some pain.  Sure, I could have everything under control (or at least the delusion of it) and watch from the sidelines alone, but then I would miss out on all the good by trying to avoid the bad.

The question about Robbie changed from “How hard will it be?” to “Is he worth it?”  I began to seek the value of his character.  I saw the way he interacted with his teenage son—the affection, the light in his eyes when he spoke of him, the playful banter.  I saw a man who had skills that could care and provide for my family—hunting, fishing, mechanics, building, while at the same time, possessing a kind gentleness, the type that stopped to admire a small bird or rabbit, wooing the tame ones to come to him.  I saw a man who loved and admired his wife and patiently cared for her through the terrors of cancer, and I knew he would do the same for me if such a time came.

I finally realized I had cut out a picture in my mind of what I wanted, not considering that God often works in mysterious ways, and I had to remove that preconceived idea in order to evaluate Robbie for himself.  As 1 Samuel 16:7 says, “Do not look at his appearance or at the height of his stature [or in this case, his circumstances], because I have rejected him; for God sees not as man sees, for man looks at the outward appearance, but the Lord looks at the heart.”

I found in Robbie the kind of heart that I was looking for, all the qualities of a kinsman redeemer.  So I presented him to my family, most eager to hear a response from my mother-in-law, Joy.  To me, her approval was symbolic of Naomi’s consent and in a way, the blessing of my late husband.

I watched from across the room as they met and hugged.  She nervously talked.  He listened. Robbie immediately identified with her story, having lost his mother to cancer several years before. The night seemed to go well, but I had no idea what she would say privately.

The next day, I nervously awaited her judgment over the phone.  Joy is a conservative soft-spoken woman, but that day she spoke with confidence and authority. “Sabrina, I am so impressed,” she said.  “I was so afraid that you would fall in love with a man who wasn’t right for you.  But I want to tell you something.  You did not find Robbie.  God brought you together.  He is kind and respectful and mature.  He is a blessing from God, and it’s no accident that you met.  He is perfect for the family, and I feel like I can love him like I love my own son.”

Our engagement lasted only three months, and we were married in a beautiful red, white, and blue ceremony presided over by our mutual friend Scott.  People often wonder how it’s possible to love someone else after having lost a man and a woman that we so deeply loved.  But just like a mother loves each of her children with the same amount of unconditional affection, we love each other and our spouses who have passed on, as well.  There is no measure to love—no matter how much you have shared with others, there is always more.

From the beginning, God has poured out his grace on our blended family. It has been far easier than I ever imagined it would be.  Yes, there have been trying times of disagreements and hurt feelings, but in general, we all get along and enjoy each other’s company.  Perhaps we have a little better appreciation for living after the closeness to death we’ve experienced, or perhaps it’s simply the mercy of God.  Either way, every person in the family has clung to the grace of Jesus and done their very best to extend it to one another.

Only God knows why we are chosen to walk the journey that he has designed for each of us.  Ruth and Naomi are just the first of a long list of sufferers in scripture who have seen the mysterious ways of God.  Robbie and I certainly have felt the pains of travail in our lives.  But like so many things, God brings good out of bad—He calls light from darkness, creates beauty from dust and ashes; He makes our weaknesses our strengths and turns our sorrows into joy.  While I miss David Beasley every single day, I’m so thankful for the gift of my kinsman redeemer.