Letting Your Husband Know You’re Proud of Him 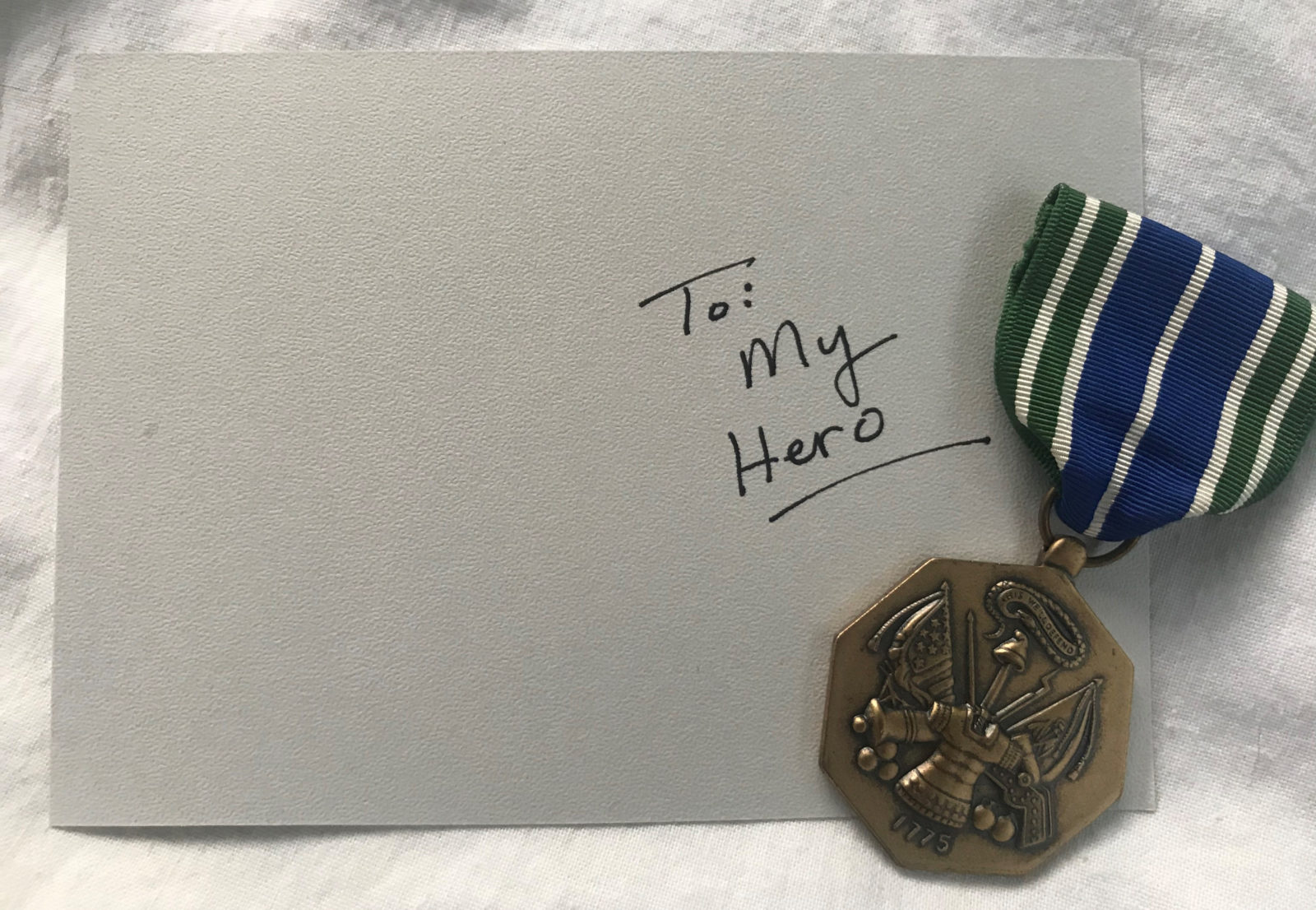 I remember a time early on in my marriage when my husband was working on a large project that took up a lot of his free time. He had sacrificed time, energy, and money to make everything work together, and there were times when he wondered if it was worth the effort.

One day when he was working particularly hard, I came into his office with a glass of iced tea, looked him in the eyes, and said, “Sweetheart, do you know how proud of you I am?”

He looked at me almost with relief, then looked down and said, “Would you still be proud of me even if none of this works out?”

“Of course, I will be,” I assured him with a kiss and a smile. “I’m most proud of you for taking initiatives and seeking to do what’s right for our family.”

His eyes lit up and his face seemed comforted. As I departed the room, leaving him to his work, he took a deep breath and the rhythm of his fingers typed out a heartier tune. Just that one small comment from me seemed to give him the peace of mind and the energy that he needed to keep going.

If I were to guess, I would say that most of us wives are proud of our husbands. But if someone were to ask your husband, “When was the last time your wife let you know that she is proud of you?” What would he say?

Shaunti Feldhahn, author of For Women Only, surveyed 1,000 men to find out their emotional needs. In a FamilyLife Today® interview with Dennis Rainey and Bob Lepine, Feldhahn said:

For men, their highest need is not to feel loved and cherished, as it is [for women]. It’s to feel respected by us and trusted by us and, in fact, we can spend so much time trying to show our husbands that we love them, saying, “I love you,” and doing all these things to show love, but if we tease them in public or make them think we don’t respect their decisions or don’t trust when they make a choice, they will feel disrespected, and they won’t feel loved.

Feldhahn isn’t the first to discover this truth. As a matter of fact, the Bible has been teaching us this fact for centuries. In Ephesians 5:33b, the apostle Paul is clear in his instruction to wives: “… the wife must see to it that she respects her husband.”

If it has been a while since you’ve shown your husband that you’re proud of him, don’t let another day go by without communicating your admiration. Here are 10 suggestions to help.

1. Just say it. Those five little words, “I’m so proud of you” are sometimes difficult to spit out, especially if it has been a while since you’ve said them. They may feel awkward at first, even “cheesy,” but once you begin, this little phrase won’t seem so strange anymore. But don’t just leave it at “I’m proud of you.” Tell him why: “I’m so proud of you for spending time with our son. That means a lot to him and to me.”

2. Brag about him to others. If you have children, you already have plenty of bragging practice. If little Suzie wins the county spelling bee, you put her trophy in a place of honor and tout that your little girl is a genius. But we wives often forget that our husbands crave the same type of praise.

Did you show off the new paint job he did in the bathroom? Did you buy a frame for the certificate he received at work? Have you shown your friends the lawn or garden he nurtured all summer?

While bragging to others, don’t forget to include his parents. Not only will they feel proud to know that their son is a great husband, but they will also feel encouraged that his wife recognizes it.

3. Dream with him. Most husbands are dreamers. My husband used to tell me of his visions of entrepreneurship. I’ll never forget when he told me about his plans to build a hotdog stand. He even had a name picked out and a logo developed. He also had several other business ideas in mind, like a coupon book and a local magazine—he thought they were ingenious ideas that were eventually going to make him rich, rich, rich!

Of course, all I could see was all my savings and security flying out the door. But then my mother’s voice called back in my mind, echoing her premarital advice, “Remember to dream with him.”

Men often enjoy dreaming about the future, even when it’s not currently possible, while women tend to think in the present, counting costs, roadblocks, and impossibilities. I used to think that if I allowed my husband to dream, I was nonverbally giving my permission for him to go ahead and get started. In reality, I’ve found that the opposite is true. He actually begins to see the practical side of things for himself.

4. Listen to your husband when he tells stories in public … and don’t correct him! Have you ever been at a friend’s house when your husband tells a story wrong? He may get most of it right, but he leaves out some interesting sideline or he gets the person’s name wrong. The standard response is, “No, that’s not the way it went. Here, let me tell it.” And then he’s left looking like a moron in front of your friends.

Let me challenge you to stop disagreeing with your husband on the little things. There may be times when he gets some details wrong, but no one is taking score about who gets the fine points right most of the time.

5. Look him in the eyes and smile. Just the way you look and react to your husband can give the impression that you are honored to be his wife.

Think about what it would mean to him if you stopped what you were doing, looked him in the eyes, listened and smiled. This action sends the message, “It pleases me to spend undistracted time with you and to hear what’s going on in your life.”

6. Resolve conflicts in private … and avoid body language that undermines your husband in public. We all get upset with our husbands at times; that’s part of marriage. But don’t drag it out in front of others. Your friends won’t see you make up later, and they’ll be left with a lasting impression of a wife’s disrespect for her husband.

I’ve been guilty of this, most often when bitterness from an earlier dispute carries over into our plans with friends that evening. When I consider my heart, I find that instead of love, my motive for huffiness is revenge, and deep down inside I hope to hurt him like he’s hurt me. So I might roll my eyes at something he says, or elbow him, or put on a look of disbelief. Body language like this quietly undermines your husband in front of others. He may not know what you’re trying to say, but he’ll read it to mean, “I’m not proud of you, and I don’t respect you.”

7. Take his side. There’s no one that’s easier for a wife to pick on than her husband. You are all too familiar with his annoying little habits, and the areas where he needs improvement. But when others start to pick on him, take his side. The jokes might seem innocent, but if you make fun of your husband publicly, you are choosing to degrade him when you could esteem him.

The next time your husband is the brunt of teasing, stick up for him by talking about his good qualities and abilities. You don’t have to act offended, but instead act proud of who he is and what he has accomplished. As a result, you will show your honey that even when you are given a choice you still choose to give him the respect that he deserves.

8. Cheer him on. Have you ever wondered why there are cheerleaders at a football game? They aren’t helping the players throw the ball, run faster, or play smarter, but their job is just as important. They encourage the players by letting them know that someone believes they can win.

A great example of this kind of cheerleading comes from Meredith. When her husband was going through medical school and working long hours, Meredith knew he was struggling just to make it through each day. So she started “What’s it Wednesdays” and would plan a weekly gift or surprise for her sweetheart. “Every week I looked forward to Wednesdays for that reason,” her husband says. “It definitely helped me through a particularly hard time in my schooling.”

9. Be interested in his projects. Every man I know has a passion for something, from watching sports to putting together model airplanes. My husband used to play Fantasy Football. Admittedly, there were times when I forced myself to keep from rolling my eyes at the mention of the word “football” because I wanted him to know that I supported his desire to fellowship with his friends and take part in clean sportsmanship.

This all boils down to starting a conversation with your husband. If he is busy researching in his office, sit down and ask him about his newest venture. “What are you working on?” is a good way to begin. He may give you a short, non-descriptive answer like “Oh, just some stuff for Fantasy Football.” Then that’s your cue to start asking questions. Ask him how he’s been playing, how he plans to improve, and don’t forget to end with an encouraging word about how he’s going to blow them all away at the finals this year.

10. Teach your children to respect him. It’s easy to openly criticize your husband in front of your children, but when was the last time you boasted about him instead? Your words of admiration will not only make your children feel more secure as they witness their parents’ love, it will also encourage them to speak as highly of their father as you do.

In addition, when your kids, particularly as teenagers, make comments that disrespect their father, be sure to let them know that such speech is unacceptable. This is important for the unity of your marriage. And when your husband hears about your comments, he will feel a renewed sense of appreciation for a wife who demands respect for him.