‘Mom, I Am Their Father’ 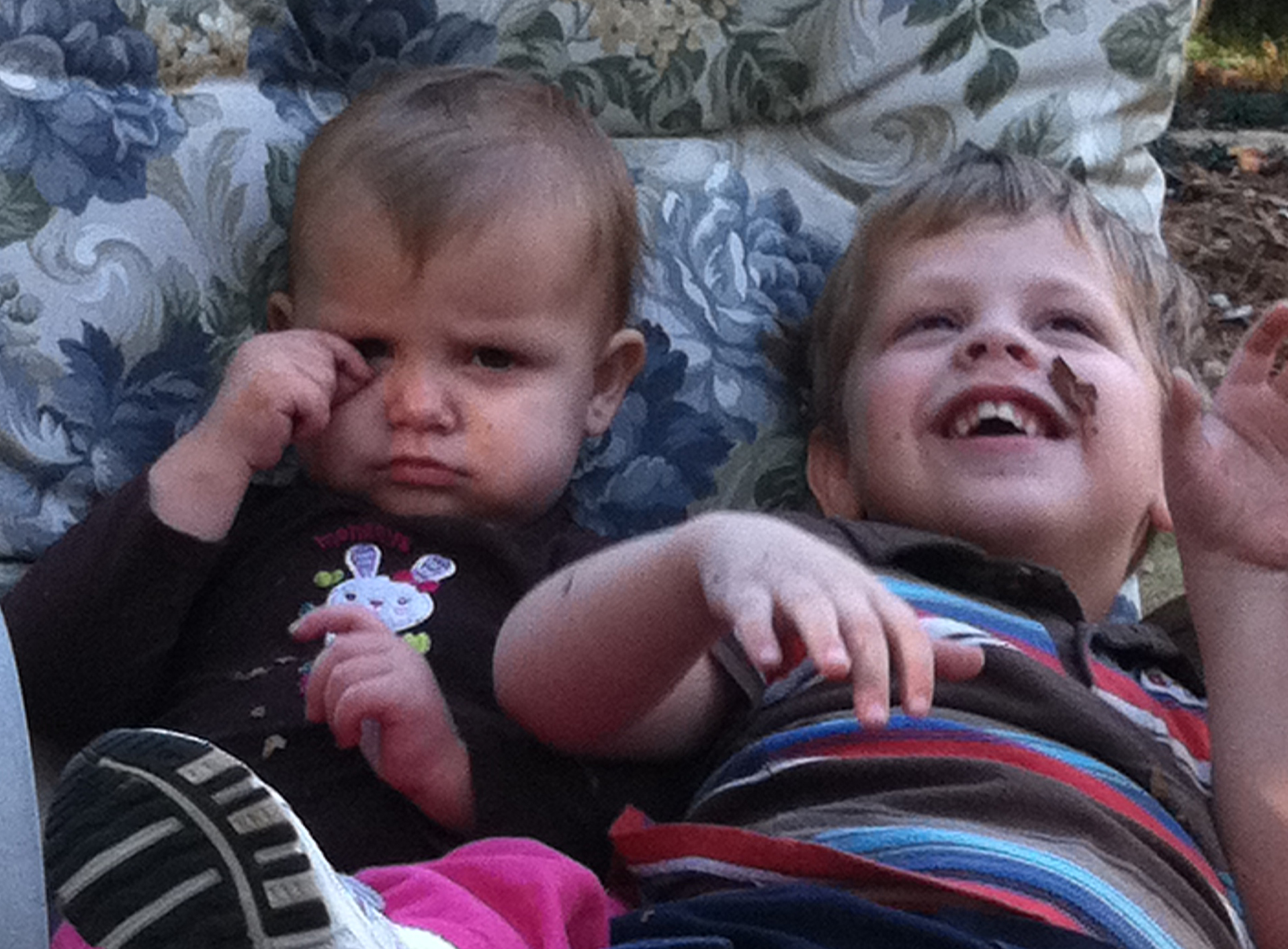 My children were just babies when my husband, David, was killed in a head-on collision. Ben had just turned two, and Katherine was only three months old.

I was worried sick about how the lack of a father would affect them, mainly because of all the articles and research I read about the importance of having a father. But there was also a more personal reason for my fears. David’s father was also killed in a car accident when he was two, and he and his baby sister were raised by their single widowed mother who never remarried. Just a few days before David died, we had a conversation in which he made me promise that if anything ever happened to him, I would get married again. He wanted his kids to have a father even if it wasn’t him.

After taking a year to grieve, to honor David’s wishes I began a man hunt to find just the right person for my kids. David’s mother and sister were also aware of David’s wishes, and they did their best to find a suitable man for the job. Over the course of three years, they set me up with four or five different guys who didn’t work out.

It was all I thought about. Every time my children went through a difficult phase I worried that it was a result of their fatherless existence. I wondered how this lack of male role model affected their confidence, stability, and self-discipline. I grieved for Katherine, who never really knew David, and I grieved for Ben, who seemed to need him so badly. I shed tears day and night, praying desperately that God would honor David’s request and bring a loving father to his little babies.

One night I was crying, asking God why he hadn’t yet given my children the father that they needed, and He said to me, “Sabrina, I am their Father.”

It had never occurred to me that my children had all the father they needed. Actually, they had the perfect Father. He was the best role model they could have, and the only one who could love them with a perfect love. All I had to do was point my children to God for their needs.

I immediately recalled the story of the people of Israel when they called out to the prophet Samuel that they wanted a king. To this point, the people had been ruled by God using whatever judge He chose. But the people cried out, “No! But there shall be a king over us, that we also may be like all the nations, and that our king may judge us and go out before us and fight our battles” (1 Samuel 8:19).

Samuel tried to tell the people that Jehovah was all they needed, but in God’s patient mercy, He told Samuel, “Obey the voice of the people in all that they say to you, for they have not rejected you, but they have rejected me from being king over them” (1 Samuel 8:7).

The first king chosen for Israel was Saul, a strong, brawny man with all the outward appearances of a king. Sadly, though, Saul did not have the heart God desired. He was power hungry and jealous. Eventually, an evil spirit came over Saul, and a new king would take his place—a man after God’s own heart, the scrawny shepherd boy, David. “The Lord sees not as man sees; man looks on the outward appearance, but the Lord looks on the heart” (1 Samuel 16:7).

From that point on I began to look for a “David” and not settle for a “Saul.” I wanted a man after God’s own heart.

The truth is that even though an earthly father is a good thing, just as David’s reign as king was good, we must not believe that the health of our children is in a man’s hands. Those kids belong to God… He is the best father they could possibly have. A man won’t solve all your problems—even the right kind of man. No matter how great a guy is, he’s going to be flawed. He’s going to annoy you and disappoint you from time to time, but our Father God will never disappoint you. His ways are always perfect.

There are many ways that children connect with a father as they find their place in a family, and a single mom is wise to pinpoint these different aspects and purposefully point the children to God to find fulfillment in these areas, whether or not a mother remarries.

Identity. Your children carry a family name that belongs to their father. There’s a sense of identity there, but when their father is dead or estranged or even away from the children in a different household, they begin to wonder how to carry the name of a person they know very little or nothing about. The name can come to symbolize a child’s abandonment or his identity as a lost person, one who lives between two lives.

But when you show your children their identity in Christ and emphasize their place as God’s son or daughter, then they don’t need to be concerned with how their name fits in, but they can look to their father God for their family ties. In Revelation 3:12 Jesus says, “The one who conquers… I will write on him the name of my God, and the name of the city of my God out of heaven, and my own new name.” As believers, we are given the name of God! In the end, we will all belong to one family name—God’s family.

Acceptance. Children need love from a father—the unconditional love that shows familial pride. Every child needs to feel accepted by his father, knowing that no matter how badly he messes up, he will always be loved.

When there is no father to show this kind of love, children can feel unstable, like a wanderer with no place to call home. As a single mom you must show your children God’s unconditional love. Read them Scriptures about the love and mercy of God. Read them the story of the prodigal son. Show them that Jesus died so there could be this kind of love from God.

Belonging. Children know from the day they are born that home is where they belong—this is the family, which is different from friends, as loving as they are, and strangers.

In the same way, a Christian’s family is the church—God’s family. Remind your children that they belong in the family of God. They can find mentors and teachers; they can find compassion and comradery. There are men in the church who can show them how a godly man’s life is lived out, something they need to see with their own eyes. And if you don’t show them through the men in the church, your children will learn from movies and the internet.

Legacy. There are certain ideas passed down by a father that a mother simply cannot teach. Mothers have a different type of legacy to leave that the children will pass down to their children, but the father’s legacy to his children is unique. For example, boys learn how a man treats other men and women, and a girl learns how a woman should be treated by a man.

When you teach your children to embrace their legacy from God, they look to His behaviors and worldview. They look to God’s Word and mirror His Son, Jesus. And when you emphasize the importance of their responsibility to uphold those family legacies, they will learn to pass that down to their children.

It can be tempting for single mothers to rush into a relationship based on fear, but there is no reason to feel inadequate on your own. Remember to wait for the David that God has for you. Don’t settle for Saul.

I went on dates and met many men during my three years as a widow, and I did find a man after God’s own heart to marry. As you date and consider bringing a man into your life and the life of your children, think through these seven tips.

1. Don’t feel rushed. Take your time and wait on God. Isaiah 30:18 says, “Therefore the Lord waits to be gracious to you, and therefore he exalts himself to show mercy to you. For the Lord is a God of justice; blessed are all those who wait for him.”

2. Don’t bring around too many guys. Kids form bonds quickly, and a break up can be devastating to a child. Limit the time a guy spends with your children until you know they are real marriage material.

3. Stay pure! Your kids know more than you think. Besides that, sex just complicates the relationship and forms premature bonds, possibly with the wrong guy. Honor God with your body. On that same note, make sure the guy you are interested in doesn’t indulge in pornography and keeps his mind pure. You don’t want to bring sexual perversion into your home, not knowing whether your children are safe. Don’t take the risk of exposing your kids.

4. As you meet guys, don’t spend too much time away from your children. Make sure they get plenty of one-on-one time with you, or they could start to resent this new person in your life. Starting a blended family with those kinds of feelings gets everything off on the wrong foot.

5. Find a man who loves your kids. Don’t take it for granted that a person couldn’t possibly not love your kids. Parents usually see the best in their children, even when a child is extremely difficult. When you get married this time, it won’t be just for you. Everyone’s personality will be a factor in your new home.

6. Blending families is hard. Even if you get married again, these father issues won’t disappear. It may even be more important to point your children to God as their father when that happens. They won’t share a name with their mother anymore, and it will take time for your new husband to love your kids as his own. That beginning awkwardness can appear at first to feel like rejection. But they will never feel that kind of standoffishness from God. Remind them often that God is their Father, even when a new man comes into their lives.

The wise single mom looks to God, not a mortal man, to fix her problems and be the answer for her kids. Your kids simply need you to point them to the one that can reach into their souls, heal their broken hearts, and love them unconditionally, and that’s Jesus Christ. He will never leave them nor forsake them, no matter how their earthly father is, and He’ll be there for them forever and ever.